You are in a room, the band is up at one end, the caller shouts:

Well, you are going to be dancing as 'couples'; you need a partner, someone you ask to join you in the dance. They say 'Yes' and you walk up towards the band.

You walk up and join the two lines forming. the people on the left are going to be dancing the 'men's role, they may not all be men but that does not matter; the people on the right, the 'ladies', with the same proviso applying.

The Longways means these two long lines down the room, the as many as will means that you don't need a specific number of couples just 'a reasonable number'. You are going to be dancing with everyone, if there are too many couples you probably won't actually dance with everyone and might get squeezed for space, too few you might end up dancing with them more then once.

Quite often the caller then says:

It's saying that the dance will have different movements for the couple closer to the band (the first couple) and the couple further away (the second couple). You'll be dancing with your partner but also the 'other couple'. The dance will be described and you'll discover you and the 'other couple' end up having gone in different directions and you are presented with someone new to dance with. Remember you were going to be dancing with everybody?

... Err, End up having gone in different directions?

Think back to the little circle of four, there are couples all the down the set looking away from the band (the 'first couples') and couples looking up the set towards the band ('second couples').

As a 'thought experiment', instead of looking at the couple facing you, look over their shoulders, you'll see another couple looking back up to you. They'll be a little way away. So, walk past the couple you are facing and you'll find them heading towards you - you are in a small circle of four again. You can do this again and find another couple to dance with, you have, as they say progressed.

If this description doesn't help, have a look at Thomas Green's page, which includes diagrams.

Of course, it all gets a little more difficult if you are at one end of the set or the other, when you look past the couple you are facing, there's no-one there. Nevertheless, you pass them, turn, watch the rest of the set and wait a little. There will be a couple heading towards you the next time round.

You are doing, but you don't know it, a duple minor. Speed the Plough is one, Nottingham Swing is another, and also Guidman of Ballangigh and Portsmouth. There are also dances described as Improper where, in the little circles of four people, the first couples have swapped places, Holmfirth Reel is one.

... The person of the opposite sex?

It's not possible to take instructions to dance with the 'person of the opposite sex' too literally, most often you'll find people dancing in couples but there's no doubt you'll meet two women dancing together, two men, or a couple with the roles switched over.

Yes, this is more confusing, and it makes the writing down of dances more difficult, but this is what the 'more careful look at the line opposite' is there for. You'll get callers explaining this as 'Sex is not what you are it's where you are...'

Now, if it is you are the couple dancing different roles, expect to have to give more help to confused looking people heading towards you.... 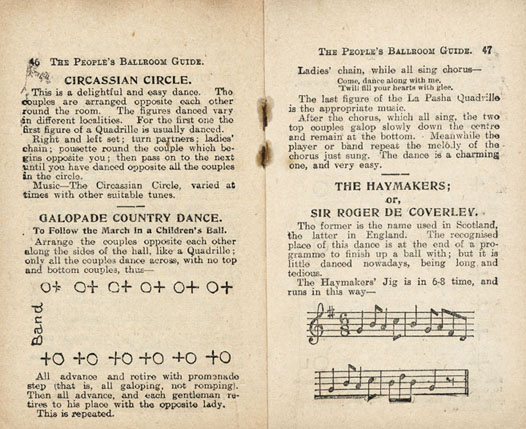 So you are walking up towards the band with your partner and people are quite obviously not sorting themselves out into men on one side and women on the other. The caller's said something like Becket formation or that the dance will be the Rifleman

What's different? you and your partner both join one line or the other, the side-by-side o and +.

You can still do the small circles of four but you'll be dancing with your other couple on the other side of the set.

And then it can get a little more difficult when you progress...