This is the dance everyone remembers from when they went to a barn dance, appearing under different names in slightly different forms across Europe. Everyone's holding hands in a big circle, there are rushes into the middle, a fast swing with someone new and a chance to catch your breath with a promenade. Quite often the last dance of the evening in eCeilidh gigs. Can be unruly; likely to be crowded and you are going to be bumping into people (and vice versa)

The caller is likely to say Circassian, Big Circle, or maybe even just the last dance. This is a dance where the name has migrated, in the Community Dances Manuals you see it recorded as seemingly a pair of dances the Circassian and Big Circle. In eCeilidh the name Circassian has been attached to the second dance.

The dance is often progressive, meaning that first time through you dance with one person, next time someone new, time after that someone else.

All join hands in one ring: Each man with his partner on his right, facing the centre

It's a circle; it's a little informal; if you have someone to dance with head up and join in, if you don't, look round the circle as it is forming up and if you see two people of the opposite sex together, ask if you can join in in between them.

At the end of the confusion the circle will be approximately man, woman, man, woman, man, woman etc... and men should have their partner on their right. The closer you get to this the easier you will find it, as a little way through the dance you'll need to find someone to swing with and if you don't have one, you'll have to find one.

It's quite possible that there's more people than space and the caller might suggest an inner circle, this is just to spread people more evenly across the floor and to stop things getting too squeezed round the edges

This is for everybody; everybody four steps into the middle..

and do it again; back into the middle...

Makes sense for the men to make themselves as thin as possible as the ladies reverse out.

This is one of the moments of uncertainty, you are heading to a new partner and have to sort out quickly how you are going to swing⬀....

You'll likely find a range of variations, it's a personal, snap decision but

End the swing and go into a 'promenade⬀'

A 'promenade' is where you are holding hands, dancing side by side, with everybody heading anticlockwise round the room.

It's where you'll see if your new partner has done any Scottish Country Dancing, if you end up in a hold like you see in Gay Gordons with the man holding his right arm around the shoulders of the lady then one or the other of you probably has...

A cross-hand hold in front of you is as good, if not better, if you are the 'man' you'll be holding your partner's left hand in your right. You'll hear the end of the of the phrase of music coming, lift your arms and spin the lady round so that she faces into the centre ready for the everybody into the middle

The dance appeared in the first Community Dances Manual (1949) [reprinted 2015] as The Circassian and the Big Circle. It's the second part, the Big Circle that has become the more commonly known Circassian. This can be traced back to Maud Karpeles' notes of 1928, where it is the '3rd Figure' of a longer Circassian Circle. (Scanned as part of the EFDSS's Full English collection) 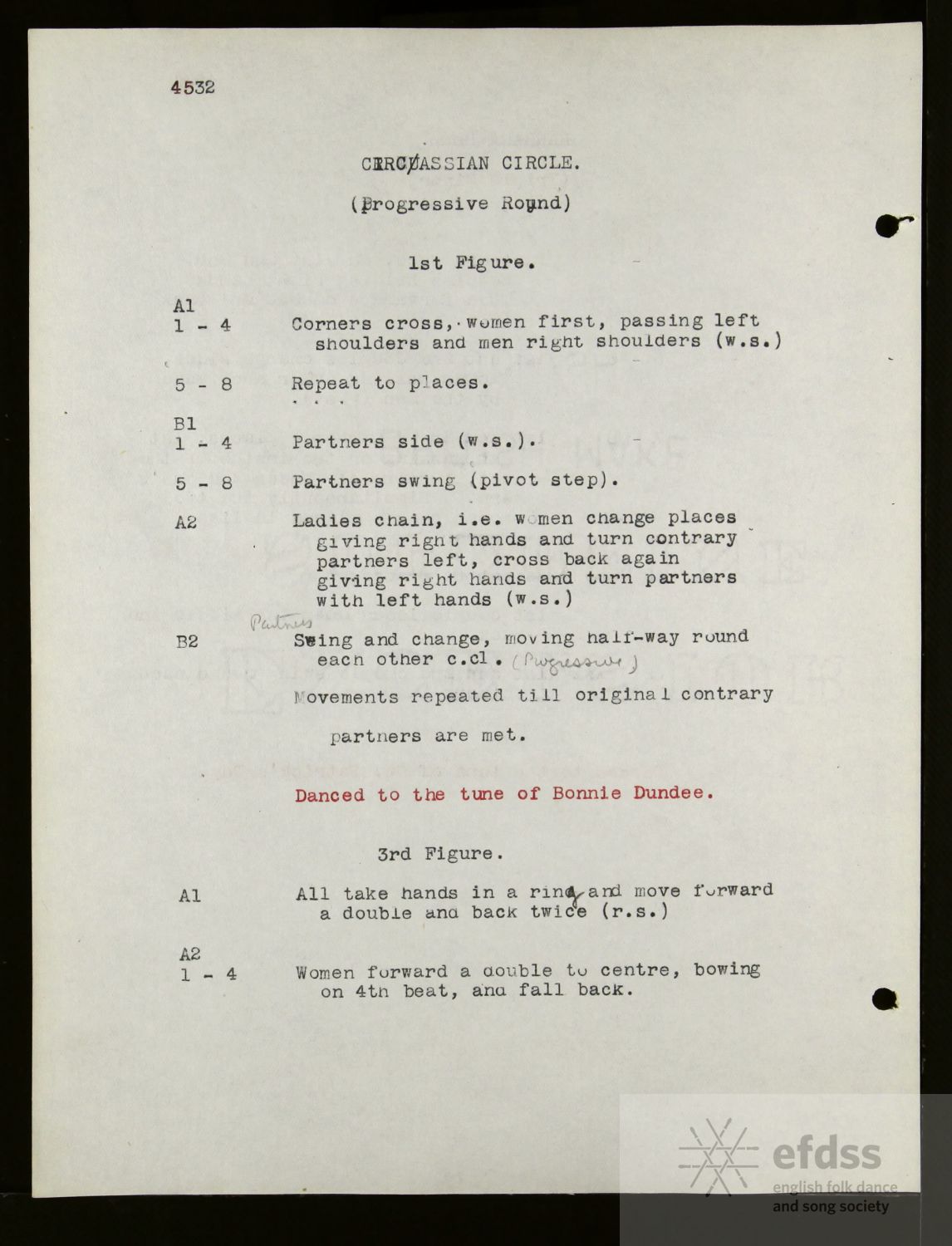 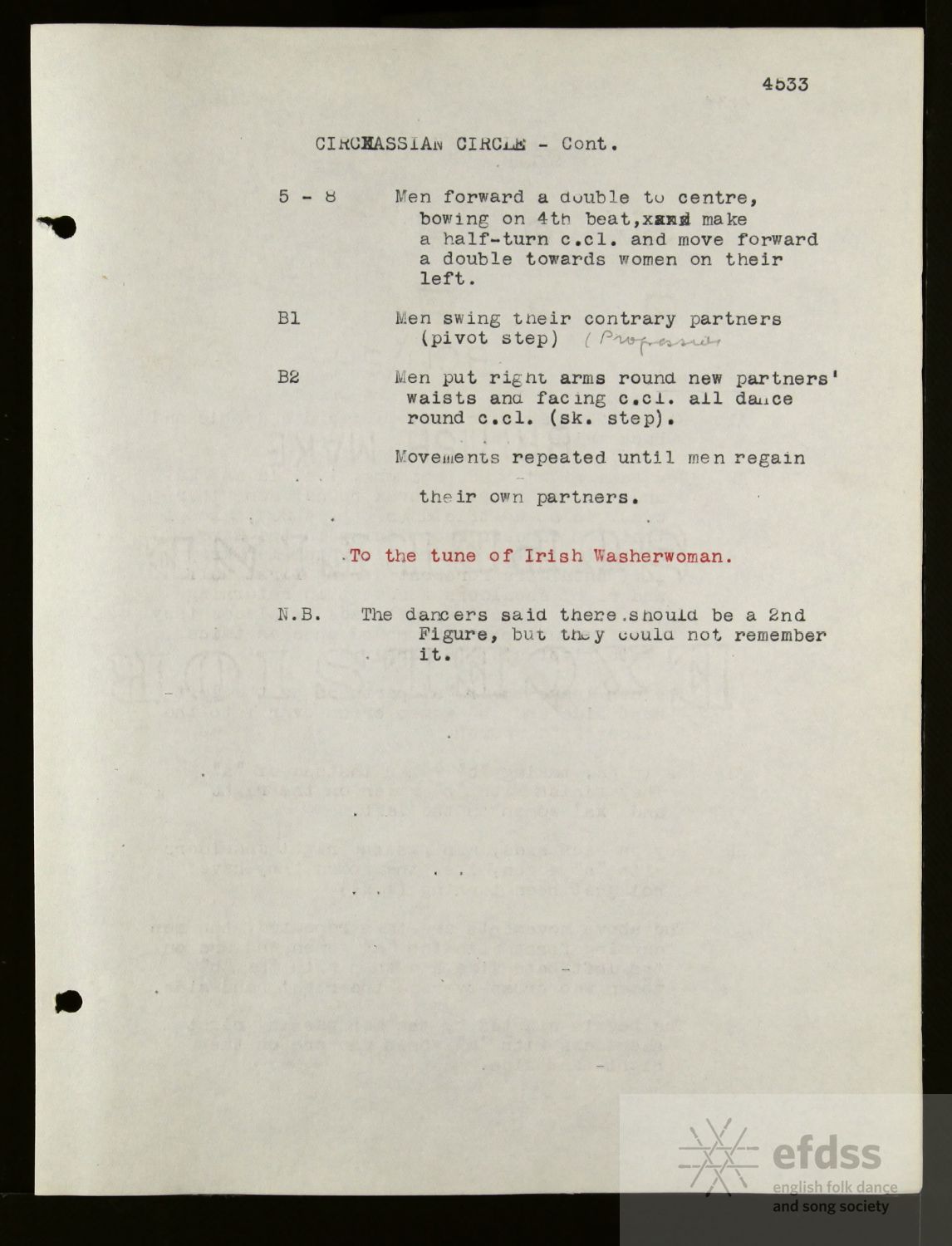 It was published in Five Popular Country Dances in 1933(?) with the note:

The notation of this dance has been compiled by Maud Karpeles from several different sources in Northumberland. the two Parts can be danced separately. (The First part was usually danced to the tune of 'Bonnie Dundee')

Earlier descriptions (and there are references from the mid 19th Century) seem to refer to the first parts of the dance, cf. in: James Scott Skinner's People's Ballroom Guide of 1905

The dance crossed into Bal Folk, as the Cercle circassien (or just Cercles) or the Fröhlicher Kreis

Nobody has a real idea about why it's called the Circassian Circle but there are some interesting discussions from the Strathspey Archive. (The context of the discussion is Scottish but the comment about the naming of different dances in the first footnote is interesting).

The Community Dances Manuals had the Big Circle danced to reels, nowadays it tends to be Jigs.